Good Friday was terrible to The Eleven (Judas seems to have already killed himself . . . to be or not to be . . . to obey or not to obey . . . ) and probably to Jesus’s mom and the other disciples too. Perhaps they might have called it “Failure Friday”. The Hope of Israel has been slain like a typical rebel against the Roman Establishment. In despair, Jesus’ body was sown into the dark of the earth, in a tomb. What was planted that day?

When we say “hope” these days we often mean something other than how I am meaning now. In Southern California we say, “I hope it snows tomorrow and school is cancelled.” But near the Pacific where I went to high school it only snows about every 10 years, if that, and I cannot recall a time it did not melt immediately when it hit the ground. So when we say, “I hope it snows so school is cancelled”, we still do our homework and make plans to go to school the next morning. We say “hope” to talk about wishful, dreamy, even whimsical ideas. And we don’t have much reason to believe these wishes will come true.

Hope is also a town in British Columbia. I’ve been beyond Hope, in both directions on the Trans-Canada Highway. While being beyond or without hope is not recommended, travelling near or beyond Hope, B.C. is encouraged.

This is beyond Hope if you are coming from Vancouver. Photograph by Reiner Harscher, laif/Redux (National Geographic dot com)

I’m not typing about a town either. When I type “hope” I mean something else.  The Hope of Humanity is a person, He is the First Fruits of the Resurrection. When Paul said something like,

But we do not want you to be uninformed, brothers, about those who are asleep, that you may not grieve as others do who have no hope. (ESV translation)

he does not mean we grieve like we are the Best Wishful Thinkers, changing the world with our Positive Disney Thinking. We don’t “Wish upon a star.” We know the Star Maker and believe, for good reason, that the One who resurrected the Hope of Humanity, will likewise resurrect us. Paul’s first letter to the Corinthians, especially chapter 15 is good reading on this.

In glory, he was resurrected in bodily form on the third day. If his body is a seed, how glorious is the plant who is alive?

When we are with people we love, a day of giving thanks gives way to contentment.

There & Back Again: the last day

When our headlamps shone before the sun did in Saint Mary, Montana we did not know this would be our last day on the road; the darkness around us paralleled our sight into the future.

Filling up the tank we head north as the victorious sun ascends in the east–assurance of some continuity.  Alberta beckons, the wide open Montana sky a canvas for the morning’s paints.  We quiet ourselves and hear the sweet song of Canadian parks, mountains & glaciers, trees & streams.  We want to go there.

But first: coffee at the Tumbleweed in Nanton, Alberta: a homey place you’ve got to stop by–if you ever find yourself in Nanton.  Onward! 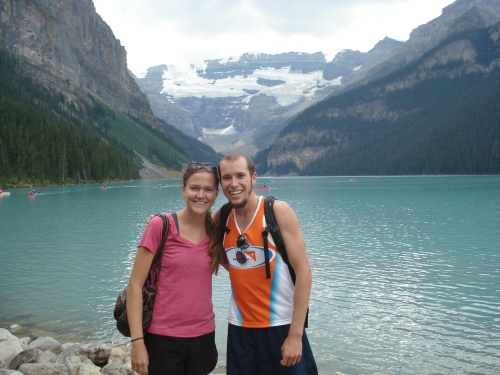 The crowds continued as we traveled west into British Columbia toward our home near Vancouver.  We kept looking for an open camp site or accommodations elsewhere to no avail. So we kept driving.  And driving.  And we found a place to stay three hours from our house, but at that point we just wanted to be home, so that’s where we went.   It was about time.

We can plan all we want for an adventure, but we always plan to be surprised.  Life is kind of that way, isn’t it?