What is the question?

To be, or not to be–that is the question:

Whether ’tis nobler in the mind to suffer

The slings and arrows of outrageous fortune

Or to take arms against a sea of troubles,

And by opposing end them. To die–to sleep

No more; and by a sleep we say to end

The heartache, and the thousand natural shocks

That flesh is heir to. ‘Tis a consummation

Devoutly to be wish’d. To die–to sleep.

Perhaps one of the most famous soliloquies in British Literature is the one partially quoted above, spoken by Hamlet.  Perhaps the question that begins it is one of the most well-known questions in English literature.  It is a question that many in North America still ask. It is a question asked by a person who knows evil. To live, or end my life? All too often, the answer is “End my life.” But this post is not primarily about suicide.

One protagonist is called Eve.  Her question, our question, is: To obey or not to obey?

The Book of Genesis, as it is often called by the English-speakers, is about creation but it is also about ordination. In the beginning, God created. The earth and everything in it is the King’s, God’s. But in the account we also see a profound ordination: mankind is made to obey God.

Instead of obeying the King, we have rebelled. You don’t have to look far to see the disease, the destruction, the disdain and the death this rebellion has caused. The problem for us is that there has only been, and there is, and there will always be, only One King. God will not be dethroned.

The fruit of disobedience is death. So before you choose suicide or death by rebellion, please ask another question and think carefully about your answer.

To obey or not to obey?

Our President, Greg Pruett recently blogged about 2014, and you can read it here.  We really like how his heart comes through as he reports exciting news. There are lots of numbers in the post, but these numbers either represent or closely relate to Dear People Made in the Image of God. How marvelous are God’s Works! 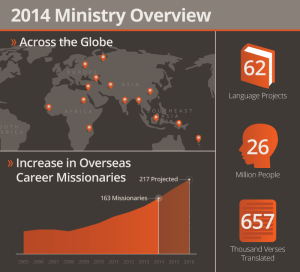 OK, so we haven’t blogged in a long time. The good news is most of you keep up with us in other ways too, so the silence didn’t worry anyone . . . right?

Something has happened since June! Well, OK, lots happened. We’ll recap the last half of 2014 and the beginning of this year.

In other news, we’ve finished two courses and are working on finishing two more. Another big accomplishment was mailing in a very thick stack of immigration paper work. We are getting closer!

Where have we been? We’ve been based out of Oklahoma City, but we have traveled to North Carolina, Southern California, Colorado, Nebraska, Kansas, Missouri, Idaho and Jamaica (family vacation–thanks Mom and Dad!).

What are we doing now?
Getting ready for a trip to Washington and British Columbia, and a move to Dallas in February (among lots of other things). And yes, stay tuned, because we are drafting several more blog posts.

We are so thankful for all you who pray for us on a regular basis.  We pray for you too, so keep us posted!